Cable Use vs Streaming In Mother Lode 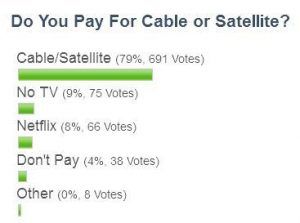 One of this week’s informal myMotherLode.com poll questions asked about Cable/Satellite use. The question was: Do You Pay For Cable or Satellite? The response was 79 percent have Cable/Satellite service. Nation wide it is estimated that 6.5 percent of households do not have cable service, up from 4.5 percent in 2010, according to an Experian Marketing report in 2014.

More options are becoming available to watch cable channels when and where you want. Dish Network Co. recently announced Sling TV, a $20 a month fee for channels from The Walt Disney Co., Scripps Networks Interactive Inc. and Time Warner Inc.’s Turner. The channels include ESPN and CNN but do not include over-the-air channels and most cable channels from NBCUniversal. Dish is the first service to offer major cable channels over the Internet, without a cable or satellite subscription. Sony is expected to debut a similar offer, PlayStation Vue, by the end of March. Individual channels such as HBO, Showtime, and Nickelodeon are preparing Internet-only offerings, CBS already has a $6-a-month service, and Major sports leagues offer live games online.

The Federal Communications Commission definition for cable/satellite services it calls multichannel video programming distributors (MVPD) is: a cable operator, a direct broadcast satellite service, or a television receive-only satellite program distributor, who makes available for purchase, by subscribers or customers, multiple channels of video programming. The FCC is considering changing the definition as it addresses net neutrality. Netflix, Hulu and Amazon would not be affected by the definition because they offer a menu of programs, not linear channels.

A January 2015 Nielsen report found that 36% of national households have access to the subscription video on demand service Netflix, 13% have Amazon, and 6% have Hulu. Notably San Francisco and Sacramento are at the top of Nielsen’s list of markets with 19% of households that can stream internet content through their TV (smart TVs). The Nielsen report also says that cable shows are watched live 46% of the time in San Francisco and Sacramento, and between 46% and 44% are viewed within 7days.