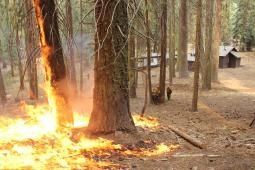 Fresno, CA — A status conference was held this week for the Tuolumne County man accused of starting the 2013 Rim Fire.

It was carried out in a federal courtroom in Fresno. Keith Emerald’s attorney had previously asked that additional information be provided about the federal investigation into the start of the fire.  Spokesperson for the U.S. Department of Justice, Mary Wenger, reports, “The status conference was regarding outstanding discovery, which has now all been provided. The next motions hearing is scheduled for May 4, 2015 at 10am.”

Outstanding discovery is a legal term that is in relation to acquiring additional information from the opposing party about interrogations, and so forth. Wenger says the new information divulged is not public at this time. Emerald is accused of allowing a campfire of getting out of control in August of 2013, and it starting the Rim Fire.