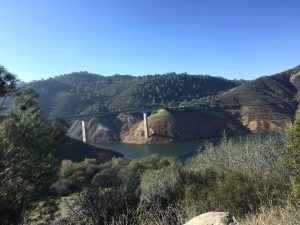 Sonora, CA — Much of northern California experienced the driest January on record, and that includes the Mother Lode, according to the National Weather Service.

As National Weather Service Forecaster Brooke Bingaman reports, “Sites that I looked at specifically, such as Sonora, Calaveras Big Trees and Groveland…those were the driest on record.”

For January 2015, Sonora received .03 inches in rainfall and the average is 6.28 inches, Bingaman states. According to weather records that go back to 1903, the previous driest January occurred in 1991, when Sonora received .25 inches of rain.

Calaveras Big Trees measured .02 inches of January rainfall. “The average for January should be 10.24 inches,” Bingaman states. Looking at the area’s weather records that date back to 1929, the previous driest January, at .47 inches, occurred in 1976. Bingaman notes that January 1961 may have been drier, at .29 inches, but seven days of data for that period are missing.

For Groveland, which measured .03 inches in January rainfall, the average is 8.19 inches, according to weather records that date back to 1945. The previous driest January, at .91 inches, occurred in 2003, says Bingaman.

For the next three months, the Mother Lode now has just a 33 percent chance of above normal precipitation, according to current Climate Prediction Center models. “Back when winter began and we had such a wet winter, we were definitely well above normal with the precipitation totals, especially along the Sierra,” Bingaman recalls. She adds a sobering statistic: “Some climatology experts, here in the state, were basically saying that we would need every month in winter to be 150 percent of normal in order to help us get out of this multi-year drought. So, the fact that January has, once again, turned out to be extremely dry — it’s not boding too well for the outlook, come this summer.”

One bit of good news, Bingaman shares, is that, towards the end of this week, forecasters are looking at a strong system moving into California. “It could be potentially pretty wet for the Mother Lode area, Calaveras-Tuolumne counties. The range could be anywhere between two to four inches, with rain starting on Friday and continuing through the weekend,” she states.

Farther north in the Sierra and along the coastal mountains, the forecast is calling for several more inches of rain, which, Bingaman points out, the larger reservoirs would capture, providing water for use in areas further south.

Snow levels, at the start, will form above 7,000 feet, Bingamen says, but by Sunday the snow levels will move up to 10,000 feet. “So, even if we do get some snow, it may melt before the weather event ends.” Chances of precipitation Friday are 30 to 50 percent; late Friday night to early Saturday morning, 40 to 60 percent; and for the balance of the weekend, 30 to 40 percent.