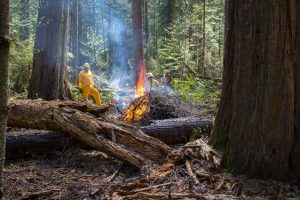 Arnold, CA – A local group concerned over the “dire’ conditions at Calaveras Big Trees State Park is calling for immediate action to protect the park from wildfire risk.

The Calaveras Big Trees Association (CBTA) has sent a letter [view here] to the head of California’s state parks, Armando Quintero, urging him to designate the park as a top priority. It also asks for the immediate mobilization of “a cavalry of forest crews” to rid the 6500-acre park of a massive build-up of dense, dry vegetation. It is the only park where the state is responsible for protecting the giant sequoias.

“In our area, it’s not a question of if a wildfire is coming, it’s when it’s going to hit us,” says Dr. Vida Kenk, President of CBTA. “So, it’s very important we be prepared. As a result of decades of fire suppression followed by limited periodic controlled burning, there has been an excessive, unnatural accumulation of fuel over the years. It will surely devastate our precious giant sequoia groves in a catastrophic fire.”

While a non-profit partner of the park, the association’s main agenda is to raise funds to support educational and interpretive programs, Dr. Kenk says the need to protect the treasured trees and the public forced them to get involved. She also said, “We’re doing this not just for the park but also for the surrounding communities. Not only could they be in danger but if the park is lost what happens to a major tourist attraction, which helps to feed our local business. So, there’s that economic aspect to our communities as well.”

She notes the Park has the last two giant sequoia groves in the world untouched by fire. Over the past 18 months wildfires have destroyed up to 19 percent of the total population of giant sequoias, Dr. Kenk relayed fire scientists noted that what stopped the fires in their tracks in the Sequoia National Park and Caldor fires near South Lake Tahoe was reaching the area where it had been carefully managed, thinned and all the dry vegetation removed. “That’s a teaching lesson – and why it’s imperative the state act with urgency to use the next few months to get Calaveras Big Trees in fighting form,” she asserted.

A $7 million state wildfire resilience fund has been allocated for prescribed burns and fuel reduction over the next five years. Acknowledging that is a significant step, Dr. Kenk advised, “Basically, we no longer have just a fire season. We have fires occurring throughout the year very unpredictably. The Park hasn’t seen significant fire in over 100 years and is ripe for a major wildfire. We cannot wait for the state to execute a five-year plan. We need to act now to get ahead of a fire.”

The work the association is calling for would require boots on the ground using machines to drag out dry vegetation and chain saws to thin the forest and clear flammable materials. She adds, “Those are not only the ground duff and understory but also ladder trees leaning against sequoia’s, that’s how crown fires get going. So, we think that sort of clean-up needs to happen now and not when the fires are already here and wreaking havoc.”

Another problem according to CBTA, the park lacks year-round personnel, such as a park forester and crew, to manage its forest. In the letter, the association offers assistance in restoring the park relaying that they are open to discussing various ways to help, stating, “We envision options such as using trail maintenance crews to assist with clearing, providing debris bins, and providing funding for contracted groups to do restorative and fire prevention work.”