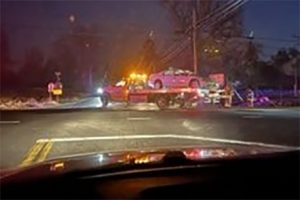 The first crash on Highway 49 at the Shaws Flat Road intersection ended with a DUI arrest. As earlier reported here, the wreck stalled traffic as it occurred during last Wednesday evening’s commute. Arrested for impaired driving was 22-year-old DeClan O’Bryan of Carson City, Nevada in a 1998 Plymouth sedan. The CHP reported that O’Bryan pulled out in front of 55-year-old Cynthia Ennis of Valley Springs driving a 2008 Scion sedan northbound on the highway at about 55 miles per hour. The two vehicles hit head-on. Thankfully no injuries were reported in the crash. Officers determined O’Bryan was under the influence of an alcoholic beverage and he was subsequently arrested.

Another collision about three hours later that night on Highway 108 also caused traffic delays. 44-year-old Shanon Hayes of Twain Harte was driving a 2006 Toyota Camry westbound on the highway, west of Via Este. In front of her was 63-year-old Joel Magee of Adelanto, California driving a 2007 Toyota Tacoma pickup. The CHP relayed that Hayes attempted to pass the Tacoma on the right shoulder and lost control, striking the right rear of the truck. The impact caused both vehicles to overturn. Both drivers sustained minor injuries. The CHP noted that drugs and/or alcohol are not suspected in this crash.