A Huge Demand For IDs 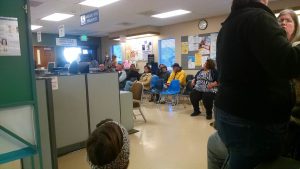 Sacramento, CA – State officials say if the initial numbers are any indication, DMV offices are going to be very busy for the next three years of the illegal immigrant licensing program.

In the first three days of AB60, which was Friday, Saturday and Monday, statewide, 46,200 immigrants began applications for a driver’s license.  Here is the DMV’s breakdown of that number:

As previously reported, there was a computer glitch at the San Andreas Office. DMV Spokesperson Jaime Garza confirmed the crash.  “We did have some minor computer issues, statewide.  Our employees worked with the customers and gave them the option of either waiting for the system to come back up or rescheduling an appointment.  Most people waited because the system was just down for a few minutes.”

There was a total of 970 drivers’ licenses issued on Friday, according to Garza. Here is the DMV’s statewide paper testing results for Friday:

Garza adds that most people got permits and still need to pass a road test before they will have a license.