Huge Gun Stash Results In One Arrested, Another A Fugitive 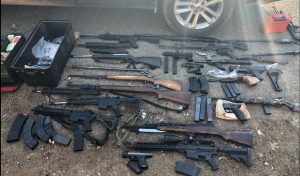 Guns and ammunitions found at the West Point residence

West Point, CA — With 21 firearms and over 2,000 rounds of ammunition found in a West Point home, Calaveras Sheriff’s Investigators had to determine whether a possible shooting spree plan was in the works.

The guns included rifles, shotguns, and handguns along with bags of various bullet calibers, as well as illegal firearms accessories were all seized in a probation search. It was carried out on Wednesday morning in the 400 block of Main Street, where 32-year-old Nicholas Harley Caspary, resided. As the raid commenced, Caspary escaped capture.

During the search, 43-year-old Tonya Elaine Rogers, who also lived at the home was arrested, as she was a felon prohibited from having firearms or ammunition. She is being held on a bail of $35,000.

Regarding whether some sort of attack or shooting spree could have been in the planning stages, Lt. Stark detailed, “No evidence of the planning of an event was located. We’re trying to figure out the purpose of the weapons for sale or protection. It’s hard to say why they had the weapons. 21 firearms are a huge amount for a prohibited person let alone a person on probation to have. We’re still investigating the reason and where they got the weapons.”

Caspary remains on the run. “He’s on the run rights now. He’s believed to be in the West Point area. However, we have no credible information of where he is at right now,” shared Lt. Stark. Anyone with information regarding Caspary or his whereabouts is asked to contact the sheriff’s office at (209) 754-6500.