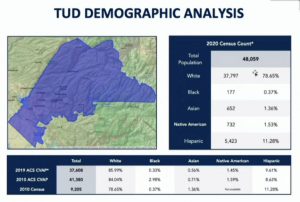 Sonora, CA: The Tuolumne Utilities District (TUD) wants to hear from the public regarding its transition from an “at large” election to a “district-based” one.

In October, its board elected to make the switch for this year’s November election cycle. TUD officials note that the change will align the district with the California Voting Rights Act of 2001 (CVRA), enforced by private lawsuits. It recognizes “at-large” elections systems can sometimes impair the ability of “protected classes” from electing candidates of their choice,” according to district officials. They added that in a “district-based” election, the jurisdiction would be split into five separate geographic sub-areas where voters elect a dedicated representative for their area.

General Manager Don Perkins explains the reason for the election switch, “The decision to adopt a “district-based” election format isn’t due to a philosophical change by the Board. Rather it’s a strategic, proactive move to potentially save the district tens of thousands or more dollars in legal fees.”

In December, TUD hired Redistricting Insights to guide the district in the transition. That includes assisting in drawing a legally permissible map for the 2022 Board of Directors elections. The firm made a presentation on that process at last Tuesday’s (Jan. 25) board meeting, which can be viewed here.

In the coming months, the Board has scheduled two public hearings to discuss the election transition at its regularly scheduled meetings on Feb. 8th and March 8th with both beginning at 9 a.m. at the district office off Tuolumne Road in Sonora or click here to view it virtually on those days.