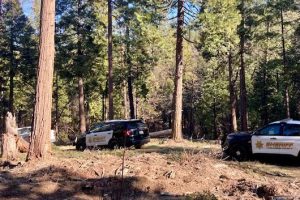 Site where human remains were found in Twain Harte

Update at 2:40 p.m.: Clarke Broadcasting reached out to Tuolumne County Sheriff’s officials for more details surrounding human remains found in the Twain Harte area on Monday. Spokesperson Ashley Boujikian responded to our questions regarding whether foul play was suspected, stating, “Nothing located [at the scene] indicated foul play. We have to do an autopsy to ID and help determine the cause of death.” She also detailed that the remains were found by a man doing fire clearance for PG&E in a wooded area. Further details on the gruesome find are below.

Sheriff’s officials revealed that heavily decomposed human remains were found in a ravine near the area of the old Sierra Pines Golf Course on Monday (Jan. 24) around 1:30 p.m. near South Fork Road. Detectives are searching for clues as to how human remains ended up in the densely wooded area, as seen in the picture in the image box.

Sheriff’s officials did not reveal who or how the body was discovered or whether foul play is suspected. They could only detail, “Deputies on scene confirmed the remains were human and detectives were called to the scene to investigate further. The Sheriff’s Office is currently investigating to identify the remains.”

Noting that this is an ongoing investigation, no further information is being released at this time.  Sheriff’s officials ask that anyone who may have information related to this case, contact Detective John Hammell at (209)694-2903.