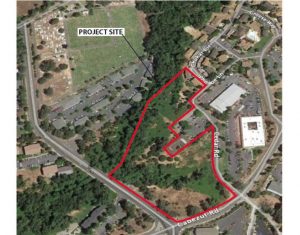 Sonora, CA — The Community Development Director For Tuolumne County, Quincy Yaley, called Tuesday’s passage of a new affordable housing apartment complex as “monumental and historic,” and the first of its kind in the county “in a long time.”

With a 5-0 vote, the board of supervisors approved plans for five buildings to be constructed on a six-acre site on North Cedar Road just outside the city limits of Sonora. It is near the intersection of Greenley and Cabezut roads.

The supervisors approved a needed zone change and site development permit so that the project can move forward.

District Two Supervisor Ryan Campbell summed up, “We need higher density housing in our community, we need affordable housing, we need infill projects, and there is talk of a potential childcare facility….to me this (project) checks many, many boxes.”

All of the supervisors were complimentary of the project, called the Hidden Meadow Terrace. District Five Supervisor Jaron Brandon questioned plans to build a fence around the complex, and also stated a desire to see some of the buildings named after affordable housing advocates in the community. He praised the design of the buildings and for taking into account environmental improvements.

District One Supervisor David Goldemberg made the motion to approve the project and it was unanimously supported.

The county helped the developer acquire a $500,000 state grant two years ago to help cover the costs of the prep work. The total project is anticipated to cost over $30-million.

More details about the project can be found here.