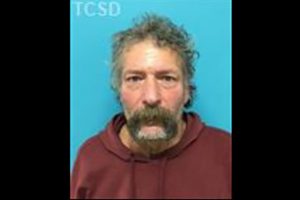 Tuolumne, CA – A deputy went to the area of Silver Spur Drive for a report of a man that was violating a restraining order and ended up on a dangerous chase throughout Tuolumne.

The Tuolumne Sheriff’s deputy spotted a pickup matching the suspect’s leaving the area last Tuesday evening and tried to pull it over. Sheriff’s spokesperson Ashley Boujikian reports, “The driver refused to stop and ended up leading the deputy on an 8-mile pursuit through Tuolumne breaking several traffic laws including crossing over double yellow lines, running stop signs, driving on the wrong side of the road, and speeding.”

Luckily, the deputy was able to get the license plate number of the truck, which was registered to that 56-year-old Mark Evans of Tuolumne. Boujikian disclosed, “Due to unsafe conditions, the deputy terminated the pursuit near the area of River Ranch Road.”

The next day, Wednesday, January 12th, deputies caught up with Evans in Tuolumne where he was arrested for felony evading a peace officer with disregard for safety and violating a court order. His bail was set at $50,000.