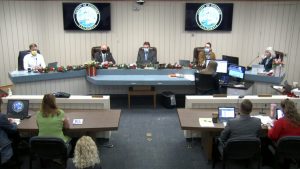 Sonora, CA — There remains uncertainty regarding the future of ambulance services in Tuolumne County.

The county has been in partnership with Manteca Ambulance Service since 1987. Tuolumne County owns the ambulance stations, vehicles and equipment, and the district provides the day-to-day staffing and oversees operations. During the last fiscal year, the contract cost Tuolumne County just over $4-million. The county has five advanced life support ambulances and four stations.

Manteca Ambulance District responded to around 7,500 calls during the past fiscal year. It included 1,200 requests from Adventist Health Sonora to transport patients to out-of-county facilities.

In addition, 201 calls were for mental health patients needing transport to an out-of-county psychiatric facility.

The current contract with Manteca runs through 2026, but there have been several cost adjustments in recent years citing things like increased expenses and a rise in the minimum wage.

There was some recent friction when the district requested that there be a cap on the number of transfers from Adventist Health Sonora and the elimination of psychiatric transports. At Tuesday’s Board of Supervisors meeting, Ambulance District CEO Bill Caldera stated there is a local, and nationwide, shortage of paramedics, which prompted the request. Hiring staff to meet the demand has been a challenge. They are competing with the Central Valley on salary and incentives.

Hoping to get the county’s attention, in November, the district gave the legal six months required notice that their partnership with Tuolumne County would end on May 5. Tuesday, Caldera stated a hope that the two sides could still find common ground so that Manteca will continue to be the provider.

With a 5-0 vote, the supervisors gave direction to continue talks with Manteca, in hopes of possibly finding that common ground, while also requesting proposals from other groups that could be interested in taking over the service.

More will be known in the coming weeks and months.