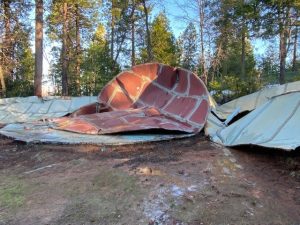 Update at 3:30 p.m.: Tuolumne Utilities District (TUD) has provided an update to Clarke Broadcasting regarding a water tank in Twain Harte that “completely failed” this morning. TUD spokesperson Lisa Westbrooke detailed, “The District’s Construction and Distribution crews were able to complete the repair and restore water service by 3:00 PM. TUD crews were able to intertie from another nearby pump station in order to pump water to customers that were initially impacted by the loss of the water tank.” She added that what caused the failure has yet to be determined. Additional information on the incident is below.

The district reports that all of the water was released suddenly (100,000 gallons) and it caused some property damage to some nearby structures. TUD spokesperson Lisa Westbrook reports that thankfully there were no injuries. Adding, “The cause and full extent of the impacts of the tank failure are under investigation. Customers in the area may experience low pressure or no water. TUD crews have responded and are working to deploy an alternative water source as quickly as possible.”

It is not immediately clear how many customers are impacted. The incident occurred at around 7:30 am. We will provide more information when it becomes available.