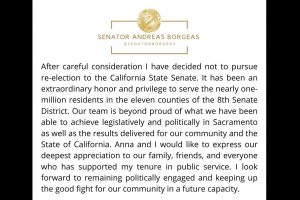 State Senator Andreas Borgeas statement on not running for re-election

Sonora, CA – Mother Lode State Senator Republican Andreas Borgeas this afternoon announced he will not run for re-election to that seat.

Borgeas is stepping out of the political ring and will not be running for another office either. Currently, he represents District 8, which includes Tuolumne and Calaveras counties.

He explained, “After careful consideration, I have decided not to pursue reelection to the California state Senate. It has been an extraordinary honor and privilege to serve the nearly one million residents in the election in the 11 counties of the 8th Senate District. Our team is beyond proud of what we have been able to achieve legislatively and politically in Sacramento as well as the results delivered for our community and the state of California. Anna and I would like to express our deepest appreciation to our family, friends, and everyone who has supported my tenure in public service. I look forward to remaining politically engaged and keeping up the good fight for our community in a future capacity.”

If Borgeas had run for his seat he would have been facing off against another Republican, Senator Shannon Grove (Dist. 16-Bakersfield) because redistricting put them in the same district. In December of last year, he looked into running for U.S. Congressman Devin Nunes’ (R-Fresno) seat after he stepped down to head former President Donald Trump’s new media company, as earlier reported here.

Borgeas did not mention any next steps or future plans.