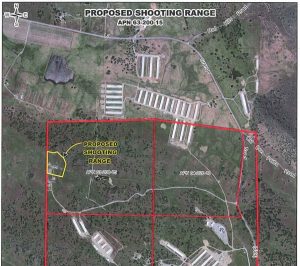 Sonora, CA — A decision about conditional use permits for an existing shooting range has been delayed by the Board of Supervisors. As stated by Community Resources Agency Director Bev Shane, “Late yesterday afternoon we received a letter from Jason Holder, representing the Holder Law group, whose client is Larson Farms who owns property next to the shooting range. This was a large amount of material, county counsel and I have not had time to look at that.”

The open hearing gave both sides a chance to state their reasons for wanting and not wanting the situation to change.

The range is located on 5.4 acres of a 253.5 acre property in the 10000 block of La Grange Road. The applicants are Timothy and Joan Diestel. The proposal recieved four objections, was modified, and has gained the approval of the county planning commission. Four properties in that area, a total 644.7 acres, are under Williamson Act Contract. State funding was cut for the Williamson Act but it allows land to be taxed at a lower rated based on the income the land is able to produce.

A total of 18 people spoke in favor of granting a conditional use permit and three, including Ken Larson, spoke against it. Larson stated, “I am one of the reasons we are here today. I started this whole process with filing the complaint after I was shot at on my property.” He went on to say, “They are trying to apply for a recreational use permit and at the first ag advisory committee meeting they kept saying it is recreational, it is fun.” He noted many of the 18 in support were in favor of benefits of the educational and tactical training offered by the shooting range. Larson says, “So it’s changed from recreational now to defensive, which I don’t necessarily have a problem with, but this all should have been sorted out. If they would have stepped up and gotten the permits before they even started this process we wouldn’t be here today.” Another local resident said that everyone in the neighborhood is paying for Holder Law Group legal representation, they expect to go to court, and they expect to sue the county of Tuolumne and others if the permit is granted.

The board scheduled to discuss the issue further on November 4th at 2:30pm.