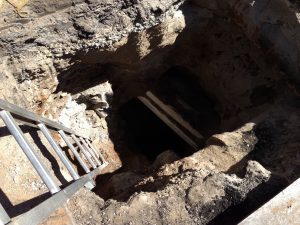 Sonora, CA — Sonora Public Works officials now know what caused a nine and a half foot deep sinkhole on Stewart Street. The roadway was shut down between Lyons and Theall Streets until three this afternoon. During that time, an AT & T engineer worked to remove a concrete conduit covering an old storm drain, revealing the problem.

“It’s apparent that there has been a lot of construction that’s gone over the top of our storm drain,” explains Sonora Public Works Supervisor Bill Seldon. “They must have compromised the lid on the storm drain, which was slate, and instead covered it with plywood.”

Seldon says that repair dates back to the 1970’s and that wood has since rotted away.

“That has allowed the sand to trickle down into the storm drain and whenever it rains it washes that sand away, allowing the earth to slowly give way,” says Seldon.

The roadway will be closed from 7 a.m. to 3 p.m. tomorrow and Friday as crews shore up the leak. However, steel plates will be put down each day after the work is completed allowing traffic overnight. Seldon says the roadway will close again one day next week for paving.