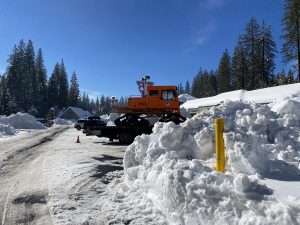 San Andreas, CA — With a 5-0 vote, the Calaveras County Board of Supervisors ratified a local state of emergency declaration related to last week’s winter storm system.

The move came after Calaveras Office of Emergency Services Coordinator John Osbourn declared the local state of emergency back on December 29 and the following day Governor Newsom signed a state declaration for 20 counties, including Calaveras.

At a special meeting yesterday to ratify the declaration, Osbourn stated that Calaveras will now have access to state disaster assistance act revenue. How it will work is not immediately clear, and he noted that most counties impacted are still in the process of digging out and assessing the damage.

Federal funding could also become available if Governor Newsom decides to request a national emergency declaration from the Biden administration. Osbourn indicated it is a possibility since Nevada and Oregon also reported significant storm damage.