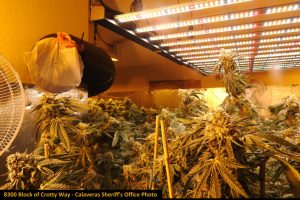 The Calaveras County Sheriff’s Office Marijuana Enforcement Unit on Tuesday, Dec. 28th served two unrelated search warrants at two properties in Valley Springs where illegal marijuana cultivations were discovered where both homes had been converted into indoor grows. The first was in the 7000 block of Southworth Road where deputies seized 928 growing plants and over 65 pounds of processed marijuana, worth an estimated $1,206,000. No suspects were found at the grow.

Later that day in the 8300 block of Crotty Way, the unit confiscated 729 growing pot plants along with a few pounds of processed marijuana exceeding an estimated worth of $950,000. Mold could be seen growing throughout the house and pictures were sent to county code compliance officials for further investigation, according to sheriff’s officials.

One suspect, 38-year-old Qicong Huang from Richmond, CA, was located on the property. He was cited for illegal cultivation, maintaining a drug house and conspiracy to commit a crime. The public is encouraged to call the sheriff’s office Anonymous Marijuana Tip Line at (209) 754-6870 if they suspect an illegal grow in the county.