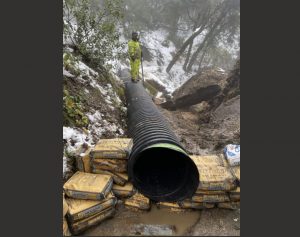 Sonora, CA — PG&E has completed needed repair work on its Tuolumne Main Canal which had limited water supply for the Tuolumne Utilities District.

TUD asked customers to conserve starting on December 28 after a large tree fell onto a flume just below Lyons Reservoir. PG&E owns the main canal, but the water it transports goes to TUD.

Water from Lyons was again released to the area damaged by the Main Canal on January 1st.

In addition to the PG&E infrastructure damaged, TUD suffered minor to major damage on some of its district ditches.

Trees are down in various areas. Also, the Soulsbyville ditch suffered a berm failure, and the Eureka Ditch was damaged by a fallen tree. Repairs are still being made on the latter incident.

The flow to all district customers should be restored by the end of the week.

Spokesperson Lisa Westbrook adds, “TUD would like to thank all its partners who have and are aiding in this emergency response. The people of Tuolumne County have a great reputation of stepping up in times of crisis. We would like to thank all the PG&E and TUD crews for their tireless work in the extreme weather through the holidays.

TUD has lifted its earlier call for water conservation.