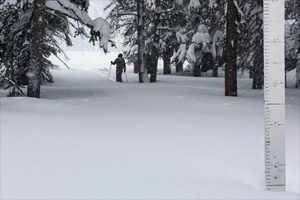 Yosemite, CA – The recent winter storms that blanketed Yosemite National Park have set a record for the snowiest December since 1980 when record-keeping started.

Just this week another 78 inches of new snow fell on Tuolumne Meadows. That equals six feet of settled snow, according to park officials.  Adding that to the snow accumulation already this month, it brings the total amount to 154 inches to date. The previous most snow recorded in December was 143 inches in 1996.

Unfortunately, this does not translate into the most water. Park officials detailed that the water content of the new snow, measured by melting the snow in a rain gauge and then measuring the height of the water in a calibrated cylinder every 24 hours, does not make this the wettest December. Other storms that have had rain accompanied by snow have had higher water contents, according to park officials.

One area that rangers are keeping an eye on is possible avalanches. The current level of concern is moderate, as can be viewed here. However, rangers are watching one primary hazard called “wind slab avalanches.” Park officials describe that is when there is “plenty of low-density snow available to be transported by the wind and form into what is called a “slab on lee slopes,” as shown in the diagram. This week rangers have had a hard time assessing avalanche activity as it has been unsafe to access certain areas of the park and instead have had to use binoculars to scour the landscape.