Mono Way Crash This Weekend Not A Result Of Fog 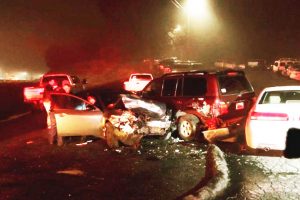 Crash on Mono Way in the Peppery Restaurant parking lot

Sonora, CA – It was a foggy night when a multi-vehicle crash occurred at the Peppery in East Sonora, but officials say that was not the cause of the incident.

The collision happened this past Friday just before 6 pm in the 13400 block of Mono Way near Sullivan Creek. Driver, 23-year-old Austin Crook, and passenger 22-year-old Walter Taylor, both of Stockton, were in a 2009 Mazda 6 sedan passing by the Peppery Restaurant. Sonora CHP Unit spokesperson Officer Steve Machado reported that Crook allowed his vehicle to drift off the roadway where it smashed into two unoccupied vehicles in the eatery’s parking lot.

Taylor suffered serious injuries and was taken by ground ambulance to Adventist Health Sonora for treatment. Machado detailed, “Further investigation determined Crook was driving his vehicle while under the influence of an alcoholic beverage and subsequently placed under arrest.”

After being treated for minor injuries, Crook was arrested for felony DUI resulting in bodily injury and placed on a $25,000 bail.