One Arrested, One Wanted For Ax Attack 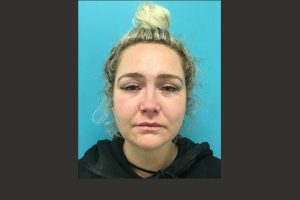 Groveland, CA — A fight between two couples over money resulted in a Groveland woman’s arrest and her male accomplice remains on the loose.

Tuolumne Sheriff’s Deputies responded to a residence last week on Nob Hill Circle in Groveland for a report of an injury assault. Two victims were found at the home a male and a woman. He had serious injuries to his head and she complained of pain in the head area.

The victims told deputies that they had a dispute with 27-year-old Kendra Springer and 35-year-old Jeffery Peters over some missing coins. Their worth was not given by Sheriff’s spokesperson Nicco Sandelin, who detailed that Springer and Peters reportedly forced their way into the home. The victims recounted that they were assaulted by Peters, who was wielding a large knife and a hatchet, which he allegedly used to hit the male victim in the head. Sandelin added, “Peters struck the victim’s car windshield several times causing damage. Peters and Springer fled the scene prior to deputy’s arrival.”

Shortly afterward, Springer was arrested at her residence without incident for battery on a person and conspiring to commit a crime. Peters has not been apprehended. Anyone with information regarding his whereabouts or this incident is asked to contact sheriff’s detectives at 209-533-5855.