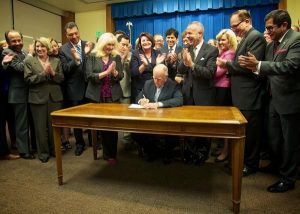 Sacramento, CA — A $7.5 billion water bond will go before California voters in November.

The legislature approved the bipartisan bond yesterday afternoon, and it will replace the planned $11.1 billion bond, which Governor Jerry Brown had called too “pork laden.”

Governor Brown says, “Water is the lifeblood of any civilization, and for California it’s the precondition of healthy rivers, valleys, farms, and a strong economy. With this water bond, legislators from both parties have affirmed their faith in California’s future.”

District 14 Republican Senator Tom Berryhill says, “Not only was this a big win for agriculture, industry, jobs, and all of California, it was also a win for bipartisanship.”