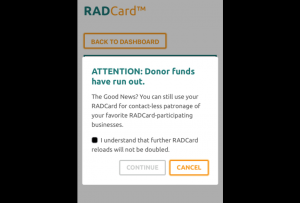 Rad Card Program - Out of Funds

Sonora, CA – Miss the chance to get in on the Tuolumne County Rad Card program? – the Sonora Area Foundation (SAF) is giving the public a second chance to get those matching funds.

After finding out how popular the matching gift card program was and its benefit to the community, the foundation donated $100,000 to keep it going ($50,000 from donors and $50,000 match by the foundation). A gesture that was praised today at the board of supervisor meeting by Chair Ryan Campbell,  “It is just amazing that they would step up and see that this program was popular and successful and make an investment in the community. Really, really grateful, many thanks.”

The county noted that as of November 30, approximately $200,000 of funds have been spent by program participants. With its success, District 4 Supervisor Kathleen Haff recounted how the program came about after she sent a message to Executive Director of the Tuolumne County Visitors Bureau Lisa Mayo last year after seeing it work in Modesto. Haff stated, “She knew about it. So, that’s how this whole thing started with us in Tuolumne County. With the one idea of well they’re doing it let’s see what we can do. Now it’s become a reality.”

The initial county gift card program used $500,000 of federal American Rescue Act money as matching funds. The way it works is through an app that allows people to purchase up to $100, in increments of $25, on a card and it is equally matched with those funds. It was so popular those matching funds ran out in a week, as reported here.

Some supervisors were also inundated with email complaints. District 1 Supervisor David Goldemberg detailed that some people were allegedly exploiting the $100 limit by signing up with multiple email addresses. Adding, “We need to figure out how to control that because a lot of people ended up not being able to participate and they were disappointed. I think we need to figure out how to prevent that.”

District 5 Supervisor Jaron Brandon added that there were some “bugs.” He wanted the board to send a letter to Modesto Improvement Partnership Inc., the company hired to create the program, about those problems that included an app update while card buying was going on causing headaches for some consumers and businesses. That in turn caused some email sign-in problems and businesses not getting payments for a short period. County staff noted that all of those issues have been addressed. Other board members and staff pushed back stating they knew there would be bugs and the company has met its obligations. Instead, CAO Tracie Riggs suggested having staff talk to company officials and work out a resolution for moving forward in the future.

In the end, the board voted unanimously to accept the SAF donation and extend the RAD Card program. Staff noted that the funds should be available later this week, stating that the public will be notified when gift card buying can begin again. Click here for how to access the app.