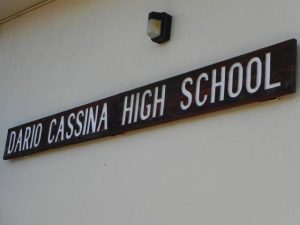 Sonora, CA – A scare for Cassina High today as a student was arrested after making shooting threats against the school and other students.

School administrators called in the threat to police around 12:24 p.m. In a written press release, Sonora Police Chief Turu Vanderwiel reported that “a student had made threats to commit a shooting on campus.” An investigation began, and shortly afterward officers developed probable cause to arrest a male 17-year-old student on suspicion of felony criminal threats. Due to his age, the student’s name is not being released.

“We arrested the student at Cassina High School. During the arrest, a search of his person was conducted and no weapons were found,” said Police spokesperson officer Thomas Brickley.

Chief Vanderwiel added, “The student’s motives for making the threats are not clear at this point, and we will not be releasing any specific details in order to maintain the integrity of the investigation.” He also commended the quick actions of school administrators and those who came forward to report the deadly threats.

Just on Tuesday, a 15-year-old teen was arrested for shooting eleven students at a high school in Michigan where four were killed.