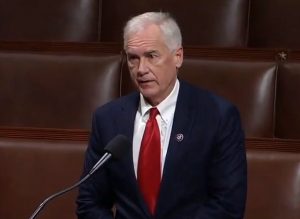 McClintock went on the US House Floor yesterday and stated, “The Caldor Fire raged in the Sierra Nevada of California for 68 days last summer, consuming more than 221,000 acres of forestland, making it the 15th largest and 16th most destructive fire in the history of California.”

“It literally wiped out the Gold Rush-era town of Grizzly Flats and for days threatened the City of South Lake Tahoe.  It destroyed nearly 800 homes, leaving hundreds of families homeless and destitute.”

McClintock says President Biden visited the fire area on September 13 and promised to “take care” of the victims.

McClintock went on to say, “This fire is indeed a federal responsibility, and the federal government owes to every one of the fire’s victims the full resources available to get them back on their feet.”

He added that the Federal Emergency Management Agency has refused to approve individual assistance for victims of the fire, despite multiple appeals. McClintock says he has written three letters to the President about the issue.

Adding, “Survivors hoping to rebuild their homes face an insurance deficit of $200,000 or more.  Many survivors are uninsured, and nearly all of them are underinsured due to the severity of recent wildfire seasons.  Survivors who were able to remain on their properties still lack access to potable water.”

A Presidential Disaster Declaration was issued for the Caldor Fire allowing local officials more resources to clean up the damage.

You can view McClintock’s entire speech by clicking on the video box.