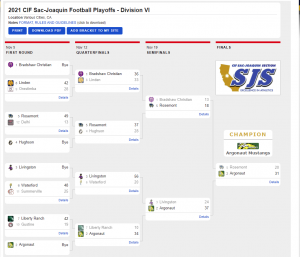 Jackson, CA — Argonaut High School football in Jackson finished second in the Mother Lode League to Sonora High, but the team is finding great success in the postseason.

The Mustangs finished 3-1 in league play as the only loss was to Sonora in late October, 28-21. They went on to qualify as the second seed in the CIF Sac Joaquin Division VI playoff bracket. The Mustangs received a first-round bye, and then went on to defeat Liberty Ranch 34-10, Livingston 37-24, and Rosemont 31-20 (championship round).

The winner will move onto the State Final next week against either Quartz Hill or Palo Verde Valley.