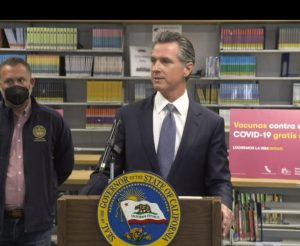 Sacramento, CA — Governor Gavin Newsom is taking issue with the argument that the recent increase in high profile shoplifting crimes is a direct result of Proposition 47 that was approved in 2014.

It was a tool to reduce the prison population.

Many Republicans, and law enforcement organizations, opposed the measure because it reduced some felony crimes to misdemeanors. For example, it made theft offenses misdemeanors unless the amount stolen is over $950. Shoplifters can now strategically monitor how much they are stealing to avoid a felony offense.

Asked about it at a press conference, Newsom argued, “We’re seeing shoplifting increase in states that don’t have anything like 47. And I think any exploration on this subject must fully explore the ‘why.’”

He also argued that Proposition 47 is being used as a “scapegoat,” adding, “I think it is more complex than that.”

He argued that multiple misdemeanors can lead to felony charges for shoplifters, and challenged local prosecutors to come down harder on the multi-offenders.

Newsom did refer to the status quo (crime increase) as “unacceptable,” and promised that next month’s new state budget proposal will increase efforts to crack down on organized retail crime rings. The state also just passed a new law allowing for some felony prosecution on theft cases under $950, but only if they can be directly tied to an organized crime ring.