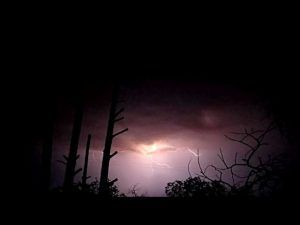 A Flash Flood Warning remains in effect until 5:15 PM for upper Tuolumne County.

At 2:49 PM,  a thunderstorm producing very heavy rain was reported over the warned area. Thunderstorms were moving into the northern part of the Rim Fire burn scar.

Runoff from thunderstorms may produce flash flooding in canyons and mountain streams and creeks.

Locations in the warning include but are not limited to lower Kibbie Ridge and Hetch Hetchy.

Most flood deaths occur in automobiles. Never drive your vehicle into areas where the water covers the roadway. Flood waters are usually deeper than they appear. Just one foot of flowing water is powerful enough to sweep vehicles off the road. When encountering flooded roads make the smart choice: Turn around. Don’t drown.

In hilly terrain there are hundreds of low water crossings which are potentially dangerous in heavy rain. Do not attempt to travel across flooded roads. Find alternate routes. It takes only a few inches of swiftly flowing water to carry vehicles away.