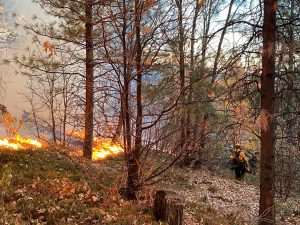 Tuolumne, CA — Don’t expect to see another big plume of smoke today from a prescribed burn in the Stanislaus National Forest, according to officials.

We reported yesterday that the 58-acre burn near Mt. Provo in the Tuolumne area was being done to improve the forest ecology and better protect Ponderosa Hills from a large wildfire.

Initially, the Forest Service reported that the burn could span two days.

Forest Service spokesperson Carol Ewell tells Clarke Broadcasting that all ignitions are successfully completed, but there will still be some minor smoke visible in the Mt. Provo area as large logs and dead trees continue to smolder and burn. However, it will not produce any level of smoke similar to yesterday’s plume, she says.

Forest managers utilize the fall and winter months to complete prescribed burning projects. Other strategic burning is anticipated to occur in different parts of the region over the coming weeks and months.