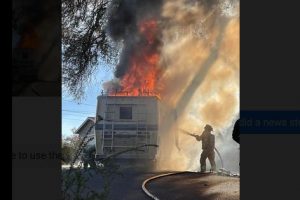 Tuolumne, CA – There was a fire that created concerns for residents in downtown Tuolumne.

As the image box photo shows flames were shooting out of a motor home this afternoon in Tuolumne. Smoke could be seen billowing into the skies above Oak Street near Elm Avenue and the West Side Memorial Park in Tuolumne just after 2:30 p.m. Firefights found the RV fully engulfed in flames and blocking the roadway. Crews were able to knock down the blaze within minutes.

The CHP reported that 50-percent of the trailer was scorched in the fire. A tow truck had to be called to the scene to remove the RV. It is unclear if anyone was inside the motor home when the fire started or if anyone was injured. Currently, there are no details regarding what ignited the blaze.