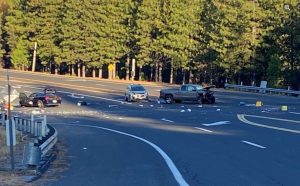 Twain Harte, CA — Officials have detailed what caused a 12-hour closure of Highway 108 near Upper Twain Harte Drive over the weekend.

The CHP reports that 65-year-old Gary Mcintosh of Sonora was at the stop sign on North Tuolumne Road at the Highway 108 intersection. He pulled his truck into the path of an oncoming eastbound Dodge Charger driven by 25-year-old Tristian Hastings of Sonora. The two vehicles collided, and Mcintosh’s truck began to spin around and hit a third vehicle involved, driven by 62-year-old Alan Leeman of Mi Wuk Village. Leeman suffered minor injuries and the other two drivers were unhurt.

Mcintosh’s truck was carrying pool chemicals that spilled onto the highway. A hazmat team responded to clean up the mess. The crash occurred at 12:55pm on Saturday and the cleanup took about twelve and a half hours.