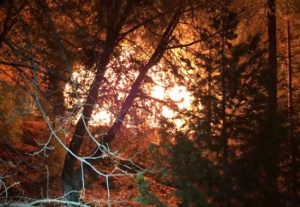 Sonora, CA — There was a fire early this morning in the 21400 block of Phoenix Lake Road in Tuolumne County.

At around 2:50am, officials from CAL Fire, Tuolumne County Fire, and the Twain Harte Fire Department responded to a report of a residential deck fire. The home was fully involved when officials arrived on the scene. Two people inside were safely evacuated. The firefighters made a defensive stand to prevent the flames from spreading to any of the bedrooms. The cause of the fire is under investigation.