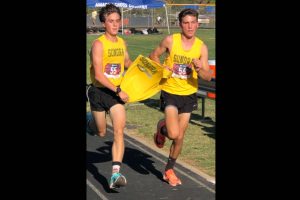 Sonora, CA — On your mark, get set, go. Sonora and Summerville have cross-country runners heading to the state finals this weekend that could make history.

This Saturday (Nov. 27) runners of both schools will be able to make their mark at the California State Cross Country Championship in Clovis at Woodward Park, a suburb of Fresno.

Sonora High Coach Frank Garcia says, “This is like history at Sonora High School. These are some of the two best runners at Sonora High. They hold most of the records at the courses locally and now they hold the record at the state course they will be running on Saturday.

He is referring to senior Adin Dibble and Freshman Broen Holman, who tied for 1st place at the CIF Sac-Joaquin Section Division IV Championship race earlier this month in Folsom with a course time of 15:41.2. That qualified them for this weekend’s state race, which is the 5K or 5,000 meters (3.12 miles) on a flat course. What is going to happen at state is the big question.

“They’re both self-motivated and hard workers. They’re great straight-A students…They will give 110 percent for workouts. They’re healthy and ready to race on Saturday,” noted Coach Garcia. He added, “Depending on how this race turns out they could both qualify for nationals competing against other athletes in San Diego in another month.”

“It feels great! The men’s team is going to state in Fresno and then we have two individual ladies on the varsity team that are going. So, it’s just a great feeling for the whole team and distance program at Summerville,” shares a smiling Coach Chris Vasquez.

The Summerville coach noted that he believes this is the first time the boy’s team has made it to the state finals. They tied with Vacaville Christian School for first place in division 5.  Vasquez added that he feels privileged to be able to work with such talented runners and for him — its personnel. That is because two of the runners are his kids, 17-year-old Sofia is a senior and 16-year-old Cruz is a junior. She is the CIF Sac-Joaquin Division 5 Champion.

“I’m just reaping the rewards of the hard work and sacrifices that I’ve made,” noted Sofia. As for Saturday’s meet, she added, “I wouldn’t say nervous. I’m very excited to race with some very fast ladies. So, excited to compete. It would be great to win, get a personal record and place high while representing my school.”

Regarding what it is like to have her dad as a coach, she shared, “I honestly think it’s great you’re able to communicate your needs. He has a lot of knowledge of the sport. Also, just relationship-wise, at practice he’s my coach at home he’s my dad, so being able to separate that really helps.”

The other female runner competing at the state meet is 15-year-old Arianna Martinez. She is a sophomore and came in 5th at the CIF SJS race. Just making it to state is a huge accomplishment, one that Coach Vasquez hopes will strengthen the school’s cross-country program, stating, “I think it will really help the distance program with the interest of new students coming in or possible students that are not part of an existing fall sport. I think they are going to want to be a part of the program.”

In the California state rankings for all divisions 1-5 in the 5K, Sofia is ranked #2 and Cruz #4. For Sonora High, Dibble is 12th and Holman 44th. With high hopes, Sonora’s Coach relayed that the last time the school brought home a title in cross-country was in 1996 when Jason Hart won the 5K champion race with a time of 15:40. That is the same course that Dribble ran a month ago with a time of 15:10.

Both coaches insist there is no crosstown rivalry with Garcia affirming, “It’s amazing, they have a great community of runners. We work together, we help each other. It’s a positive thing. it’s not like a big rivalry.”