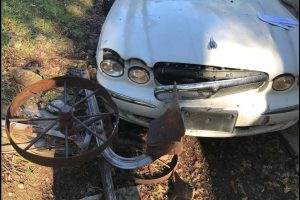 Crash and arrest site in Jamestown

Jamestown, CA – A search for a suspected DUI driver reported by several Jamestown residents to Tuolumne Sheriff’s dispatch ended when a final caller reported the suspect had plowed into his lawn art.

Deputies found a white Jaguar sedan, pictured in the image box, tangled up in an iron sculpture at a residence on Railbed Road. Witnesses also reported that the driver, 31-year-old Sathaphone Manivongphaphonhsay of Ceres, had been driving erratically and he was also spotted prying open mailboxes. During their investigation, deputies also determined that after crashing, he attempted to break into the nearby home.

A search of Manivongphaphonhsay’s vehicle turned up mail that deputies presumed to be stolen and a collapsible baton. He was subsequently arrested without incident. Once at the jail, sheriff’s detectives say an additional search of his person uncovered suspected methamphetamine, heroin, and prescription pills without a prescription.