Now Is Time To Voice Any Tuolumne County Redistricting Concerns 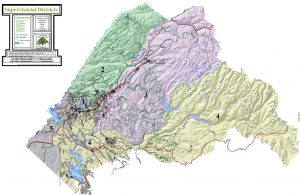 Sonora, CA — Tuolumne County will be approving new maps for the supervisor districts next month.

It occurs every 10 years, and as of right now, there are no major changes planned.

The county has five supervisorial districts. In a broad sense, District One covers the greater Sonora area, District Two is Soulsbyville and Phoenix Lake, District Three is Tuolumne, Twain Harte and up the Highway 108 corridor, District Four is Groveland and the south county and District Five is Jamestown and Columbia.

The county has held two public meetings on the topic and very limited input has been received. There have been a couple of concerns voiced that some neighborhoods have one supervisor representing one part and another supervisor for the other section. If you want to give input on your specific situation, and recommend a change, you can do so by sending a quick email, or go so far as drafting a proposed new map.

County Clerk and Auditor-Controller Debi Bautista says her office will be bringing proposed changes to the supervisors at a public hearing during the December 7 meeting. The final maps will likely be approved at the December 14 board meeting

More information, including more detailed maps, can be found here.