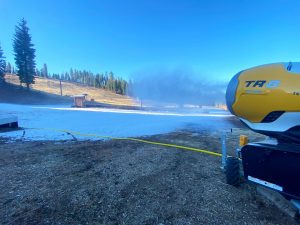 Pinecrest, CA — Activity is picking up this week at area ski resorts despite the lifts remaining idle.

Thanksgiving week is traditionally when many local ski resorts aim to open.

Bear Valley Resort up Highway 4 in Alpine County had initially announced intentions to open this coming Friday. However, the resort now reports, “Due to mother nature not cooperating with us and keeping things warm, our snowmaking has been slowed, and despite giving our best efforts, we will not be able to open for skiing and riding this Thanksgiving weekend. At this time, we do not have a projected opening date.”

They add that “good things are worth waiting for” and want to ensure they have a good base depth prior to opening for boarding and riding. However, this coming Saturday many of the Bear Valley amenities, like the onsite saloon, will be open in anticipation of the upcoming season. There will also be live music in the village.

Dodge Ridge Ski Resort is also refraining from announcing a projected opening date for skiing and boarding. We reported recently that the resort is under new ownership this year led by Invision Capital and resort President and CEO Karl Kapuscinski. Also new this year, Dodge Ridge added snowmaking fan guns which will help increase snowpack when conditions allow for it. The resort reports that many of the amenities will be open this weekend, and Santa will even be making a stop on Friday and Saturday from 11am-1pm to meet with kids. You can also pay to do some snow play.

The latest weather models are projecting mostly warm and dry conditions in Northern California over the next 10 days with an increasing chance of foothill rain and high-country snow starting the weekend of December 3-4.