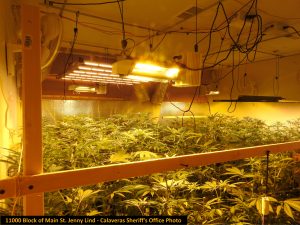 Calaveras, Ca– Calaveras County Sheriffs Office Marijuana Enforcement Unit served a search warrant on November 5th at 11000 block of Main Street, Jenny Lind. The building that was searched had been originally built as a fire station before being converted to a residence and then sold.

Deputies seized 256 growing marijuana plants and over 27 pounds of processed marijuana with an estimated value that exceeds $355,000. Part of the indoor crop had already been harvested at the time of the search warrant. One firearm was additionally seized. The lower portion of the residence, which had originally been garage space for fire equipment, had been converted to facilitate indoor marijuana cultivation.

Calaveras County Code Enforcement Officers were called to the scene and red-tagged the building for electrical and construction violations. One suspect was contacted at the scene, Ren Qi Qiu, age 48 of Jenny Lind was issued a citation of charges relating to selling marijuana and conspiracy to commit a crime. The investigation is ongoing.