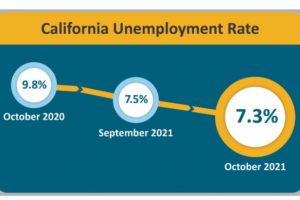 Sonora, CA – The latest job numbers for California include gains in 10 of the 11 job sectors.

While the state’s September jobless rates did not budge from the previous month, employers bounced back last month as they added 96,800 new jobs and lowered the state’s unemployment rate from 7.5 % to 7.3% in October. New data released by the Employment Development Department (EDD) on Friday showed job gains in all but one employment sector. The rally was led by white-collar jobs in management and administration totaling 39,500 and additional hiring in restaurants and hotels of 21,500. The only decline was in the government sector losing 4,000 jobs for the month.

The report also showed gains for the Mother Lode with Tuolumne County dipping from 6.1% in September to 6% last month. There remains 1,180 unemployed out of the county’s 19,690 workforce. Calaveras County held steady at 4.7% in October with 1,010 individuals without a job out of the 21,660 workforce.

Overall, California accounted for 18.2% of the nation’s total job gains in October with the state averaging more than 100,000 new jobs each month since February.

“California has again created more new jobs than any other state — averaging six-figure job growth for nine months straight — an unprecedented achievement as our economy continues to recover from the pandemic,” said Gov. Gavin Newsom.

Many of the new jobs are coming from the 2.7 million lost at the start of the pandemic when Newsom issued the nation’s first statewide coronavirus stay-at-home order. In the months ahead, the big question will be what impact inflation will have on the job market. While economists instruct that inflation can lead to increased wages for workers, they add that higher prices can cause consumers to buy less, slowing demand. That could, in turn, have employers cutting staff.

The EDD report also found California’s workforce — people who either have a job or are looking for one — decreased by 8,400 people in October.