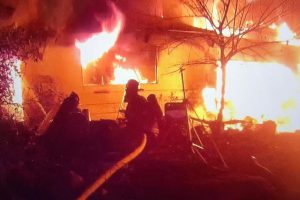 Sonora, CA – A Sonora home was nearly destroyed in a fire this weekend that was raging out of control when crews rushed onto the scene.

The dramatic photos in the image box released by Tuolumne County Fire Department (TCFD) show how the flames were shooting out of the windows of the home. The house in the 19000 block of Cedar Road off Fir Drive near Mono Way in Sonora was approximately 70 percent engulfed in fire when firefighters arrived around 11:40 p.m. on Friday, according to TCFD officials. They detailed, “Firefighters quickly ensured all occupants were out of the home and began aggressive offensive tactics to prevent further fire spread.”

Nearly 30 percent of the home and its contents were saved through the combined efforts of all responders, noted TCFD officials. What ignited the blaze remains under investigation. Resources that responded to the blaze included CAL FIRE TCU, Sonora City Fire, Tuolumne City Fire, and Tuolumne County Sheriff’s Office.