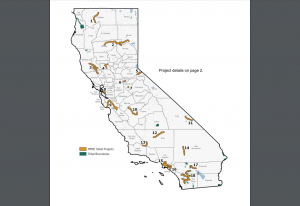 Sacramento, CA — California is spending $6-billion on broadband internet expansion in the current budget, and some of the initial projects have been announced.

The funding will be used to develop an open-access middle-mile network that bridges missing infrastructure paths.

Calaveras and Amador counties are listed among the first 18 projects receiving state funding. Calaveras County will have broadband expanded in the area of Highway 4 (including Copperopolis and La Honda Park). Amador County has a project funded on Highway 88 (from Jackson Valley to Sutter Hill and the City of Jackson).

Most of the initial projects are in rural areas with state highway rights of way, allowing for easier access and implementation.

Governor Gavin Newsom calls the money a “historic investment.” Adding, “California is committed to taking on the challenges laid bare by the pandemic, including the digital divide holding back too many communities across the state.”