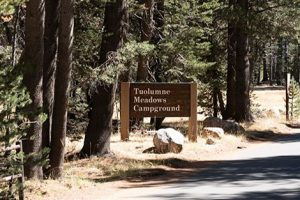 Yosemite, CA – Three campground closures for extensive renovations will impact visitors to Yosemite National Park — one could be shuttered until 2025.

That campground is Tuolumne Meadows, which is also the largest site and was built in the 1930s. It serves about 141,000 visitors per year with 304 drive-in campsites, seven group sites, four-horse sites, and 21 backpacker sites. National Park Service officials note its closure will last until 2024 and possibly 2025 depending on the length of the construction season and weather delays while crews make the renovations. While that work is being done there will be no camping of any kind at all three sites.

Regarding the impact on Yosemite, Park Ranger Scott Gediman responded in an email, “Just fewer campsites. But we did add some sites to Camp 4…demand will always exceed supply.”

The major facelift at the Tuolumne Meadows Campground is already underway, according to park officials, who detailed some of the changes to include new picnic tables, food lockers, fire rings, adding two new restrooms while rehabilitating others, new concrete parking pads, and an updated water and sewer system. The last time the campground saw an upgrade was in the 1960s.

The other two campgrounds getting an overhaul are Bridalveil Creek and Crane Flat with the work expected to last until 2023. The renovations at Bridalveil include replacing the plumbing with additional water spigots added, new water treatment equipment and generator building. At Crane Flat, the update will involve rebuilding loop roads, making some single sites combined into double sites, allowing up to 12 people to camp together, replacing picnic tables, fire rings and lockers, and drainage improvements.

The map below shows the location of the campgrounds: