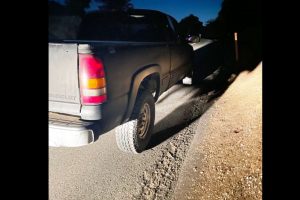 Scene of arrest on Peaceful Oak Road in Sonora

Jamestown, CA – A Jamestown man attempting to hide his identity after being pulled over did not fare so well as his true name was discovered when his wallet was found on him.

Eyeing a pick-up truck for an equipment violation on Peaceful Oak Road in Sonora Saturday night, a Tuolumne Sheriff’s Deputy made a traffic stop. A quick check of the vehicle’s registration revealed the registered owner was wanted for several felony and misdemeanor warrants.

During questioning, the driver gave a name to the deputy but then claimed he did not have any identification on him. Sheriff’s spokesperson Nicco Sandelin detailed that a body pat-down proved that to be false when his wallet with his driver’s license was found in his back pocket revealing he was  54-year-old Timothy Bain. Also, uncovered in the search was a plastic bag containing just over 74 grams of methamphetamine in the driver’s door of the truck.

Bain was subsequently arrested for his outstanding warrants, providing false identification to a Peace Officer, and possession of methamphetamine for sale.