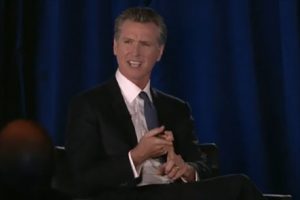 Sacramento, CA – Trick-or-Treating with the kids was the “family obligation” that caused Governor Gavin Newsom to miss the U.N.Climate Conference in Scotland that would have provided a global stage for him to tout the state’s work on climate change.

Newsom’s abrupt cancelation citing “unspecified family obligations” and his absence from public events for the past two weeks since getting his coronavirus vaccine booster shot on Oct. 27, prompted speculation about his health. Most came from conservative political opponents on social media, questioning whether the governor had an adverse reaction to the shot.

At today’s 2021 California Economic Summit in Monterey, Newsom revealed that his kids, aged 5 to 12,  held an “intervention”because they were upset that their parents would miss Halloween due to the conference. Newsom detailed, “I woke up that next morning, with something that is probably familiar to a lot of parents that knot in your stomach that I had no choice but to cancel that trip. (Clapping) I appreciate it. So, not only did I go trick-or-treating, I was able to bring the kids to work last week.”

The governor added that the demands of a pandemic, wildfires and campaigning to keep his job during a recall election had taken time away from his family and he needed to spend time with his kids. He also was photographed over the weekend by Vogue magazine at the wedding of Ivy Love Getty, a model, and great-granddaughter of billionaire oil tycoon J. Paul Getty.

Newsom also divulged that with his kids at the capitol last week, for the first time he participated in tourist traditions like taking a selfie with the statue of a grizzly bear the animal that appears on the state flag outside of the governor’s office. His office relayed that the governor had been working in the Capitol on urgent issues, including COVID-19 vaccines for kids, boosters, ports, the forthcoming state budget, and California’s continued economic recovery.

“It’s been probably the most productive week I’ve had since I’ve been governor,’” stated Newsom.