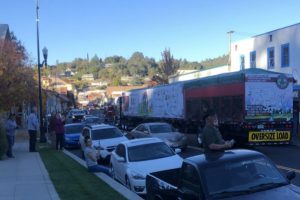 Sonora, CA — A crowd of several hundred, some ringing bells and others donning Santa hats, lined Washington Street in downtown Sonora to get a glimpse of the U.S. Capitol Christmas tree.

Sonora was one of the 19 stops along the 3,500-mile trek across the country to Washington D.C. Just after 4 p.m., the Tuolumne County Sheriff’s Posse could be seen trotting up the roadway from Highway 108, signaling the tree was finally here. Several excited kids screamed at the sight of Santa in a red fire engine followed by the main attraction, which did not disappoint, even though all that was visible was the top of the tree.

Sonora resident, Kristen Hedges along with her 7-year-old daughter Aspen and 5-year-old son Griffin anxiously waited on the corner of Stockton Street, with mom sharing, “We actually live right up the street, so we ran down here. This is a good experience, it’s good to have them be involved in some holiday fun.” Aspen expressed her amazement at this size of the tree, stating, “I like that it’s really big and that it already has ornaments on it.”

After making the turn onto Stockton Street, as can be viewed in the image box video, the tree made its way down to the Mother Lode Fairgrounds where the massive evergreen was parked for two hours. That allowed everyone to get a good look at the tree’s trimmings including a gold star, snowflakes, owl, and Bigfoot ornaments through the plexiglass casing. For further details regarding the tree click here, and to track its progress here.