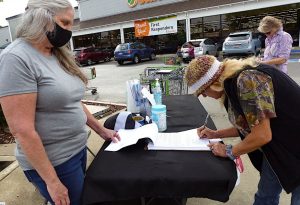 Volunteers in Angels Camp getting signatures for the fire tax

Four residents, including Dana Nichols who is a volunteer firefighter in the county, have banded together to create the Calaveras Local Fire Protection Committee. The group is organizing a campaign to get what they have titled the “Calaveras Local Fire Protection Tax Initiative” on the November 2022 ballot. It would ask voters to approve a 1-cent-per-dollar sales tax increase to fund local fire protection agencies. Organizers estimate that would generate around $5 million per year to fund improved staffing in the county’s ten local fire agencies – nine fire districts and one municipal fire department.

Nichols says each district has one staffed station made up of mostly volunteers, but throughout the county, he says there are at least 8 or 10 others that are vacant, creating slower response times; sometimes up to 45 minutes for rural areas.

“Really what we need is to have at least some paid firefighters. We’re not going to replace the volunteers completely because we still need them. But if every district were able to have a couple of people on duty 24/7, it would be a big, big boom to the speed of our response in Calaveras County.”

To qualify for the ballot, 2,161 signatures, 10 percent of the number of ballots cast by county voters in the last gubernatorial election of 2018, are needed by February 22. For more information on the tax and petition drive click here or call Nichols at 209-768-9072.