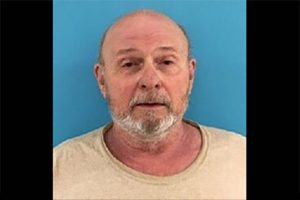 Crystal Falls, CA – A quiet Sunday night was shattered after shots rang out in the Crystal Falls area of Tuolumne County — then the sheriff’s dispatch phones began ringing.

Deputies responded to the area of Russian River Drive and Crystal Falls Drive related to the reports of yelling and shots fired just after 7 p.m. last Sunday (Oct. 24). When deputies arrived in the area, they were directed to the home of 64-year-old David Tebaldi and surrounded it.

Seconds later a victim and a witness approached deputies. The victim, a family member of Tebaldi, told deputies that during the incident, a friend had stopped by the home. While the two victims were in the driveway talking, Tebaldi ran out of the home and demanded that the friend leave. He then ran back inside the residence and came back out brandishing a 20-gauge shotgun and pointing it in their direction. Tebaldi then allegedly fired two rounds at them. Luckily, they were able to flee to safety unharmed. Tebaldi headed back into the home.

After orders by deputies for Tebaldi to come out of his residence, he complied and was handcuffed without further incident. A search of the residence located the shotgun next to the front. Additionally, spent shotgun rounds were taken as evidence. Sheriff’s officials disclosed that Tebaldi was allegedly drunk at the time of the incident. He was arrested for felony assault with a deadly weapon and willful discharge of a firearm with gross negligence. His bail was set at $50,000.