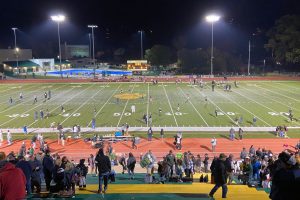 The first quarter proved to be a largely defensive battle as neither team was able to find the end zone.  Both teams traded punts on their opening drives, with Sonora pinning Summerville on their own goal line after a superb kick from junior Tim Blackmore.  Despite the difficult field position, the Bears put together an impressive drive that included a 30+ yard pass completion by senior Braylon Leveroos before failing to convert a 4th down attempt on the Wildcat 40-yard line.  On the ensuing drive, Sonora finally found the end zone as quarterback Bradley Curnow orchestrated a run-heavy drive that finished on a 13-yard option keeper.  After the Bears punted on their possession, the Wildcats reeled off another touchdown drive featuring punishing inside runs by junior Cooper Moberg.  The drive finished on a 15-yard quick slant from Curnow to junior Chance Pimentel, leaving the score 14-0 at the half.

Sonora received the second-half kickoff and continued to pound the ball with inside runs by Moberg.  This time Moburg finished the drive himself on a 3-yard TD dive.  Recent junior varsity call-up Bryce Nicholson tacked on a 2 point conversion to put the Wildcats up 22-0.  The Sonora defense forced a quick three and out, and on the first play of the next drive, Moberg broke another inside dive for a 55yard touchdown run.  A failed extra-point attempt put the score at 28-0.  The Bear’s offense finally found the end zone on their next drive with a touchdown by junior Dean Trimeloni.  The game appeared to be tightening up as two quick penalties on their next drive left the Wildcats facing a 1st and 20.  A 20-yard catch and run from Curnow to Pimentel continued the drive, however, and Curnow sealed the game with another option keeper for his second running touchdown of the night.

Sonora is guaranteed a playoff berth with their victory and potentially a first-round bye.  Summerville can still secure a playoff spot with an at-large bid.  The CIF San Joaquin section meets Sunday afternoon to finalize the playoff brackets.  Check mymotherlode.com for information on playoff game dates, times, and locations as it becomes available.