No Horses But Plenty Of Pot 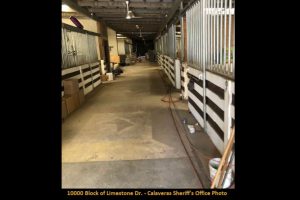 Calaveras County, CA – A raid of a Wallace property with a stable and an arena found no horses and instead nearly $2.6 million in illegally grown marijuana.

That was just one of the sites the Calaveras County Sheriff’s Office Marijuana Enforcement Unit searched a week ago (Wed. Oct. 20th), which resulted in nearly 2,200 plants eradicated, 250 pounds of processed marijuana seized worth a total of nearly $2.7 million. The first raid was in the 8000 block of Sheep Ranch Road in Mountain Ranch where 107 growing marijuana plants and 250 pounds of processed marijuana with an estimated value exceeding $249,000 were discovered. 58-year-old Darren Dean Borgedalen of Mountain Ranch was issued an illegal grow-related citation.

Later that day, was when deputies found a large indoor horse arena, stables, and other structures that had been converted to an indoor marijuana cultivation in the 10000 block of Limestone Drive. On-site was 2,050 growing marijuana plants estimated at over $2,655,000. Deputies noted that two rooms, each with two levels of plants were being utilized for growing. But it was clear the growers had bigger plans, as building materials along with partially framed walls and half of the arena floor cemented over. The buildings were “Red Tagged” by responding county code enforcement officers for violations.

Anyone that suspects a property is being used for an illegal marijuana grow is asked to contact the Calaveras Sheriff’s Office Anonymous Marijuana Tip Line at (209) 754-6870.