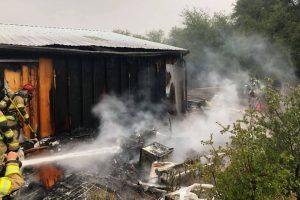 Valley Springs, CA – Firefighters had to fight not only the flames during a fire in Valley Springs but also the blustery winds and heavy rain this weekend.

On Sunday (Oct. 24), fire crews responded to a report of a barn on fire with animals trapped inside on Covey Lane. Once on scene, they discovered the flames were burning along the outside wall of the barn. Calaveras Consolidated Fire Department (CCFD) officials detailed that firefighters were able to get hose lines inside the barn and a line on the outside fire bringing it under control and preventing it from destroying the structure.

A survey of the scene determined that the flames started in a camper parked next to the barn. It had been totally engulfed in flames and was completely destroyed. Luckily, all of the animals had been evacuated by the property owners before crews arrived.

CCFD officials report that a resident living in the RV was displaced, and the Red Cross was called in to assist them. The cause of the RV fire remains under investigation. Other resources on scene included CAL Fire and San Andreas Fire.